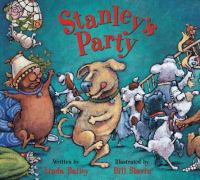 Stanley's people go out a lot. Stanley is a good dog, but one night, while they're away, the temptation becomes too great and he sneaks up onto the couch. What a wonderful experience! Soon he's also blasting the music, dancing around the living room and raiding the fridge. Stanley's never had so much fun! But after a couple of weeks something is missing, and Stanley realizes that partying alone has lost its thrill.
Publisher: Toronto : Kids Can Press, c2003
ISBN: 9781553377689
9781553373827
1553373820

A fun book to read aloud, Stanley gets into mischief (as do all dogs) when his owners go out for the night. He keeps trying forbidden things, until ultimately all the neighborhood dogs end up at a wild party at Stanley's house.

Wow, this is a fun book about a dog that takes things a little too far, just like some party animal people. It can be enjoyed by both the readers and the listeners.

Home alone one evening, Stanley explores what happens when he sneaks onto the couch – it was even better than he ever dreamed! Pretty soon he parties every night alone, but realizes something is missing – friends! Stanley must also keep his new lifestyle a secret from “his people”.

Stanley’s Party was the first in the series, and answers the question all dog-owners ask – what do they do when they’re alone? Stanley tests his waters first by taking a seat on the couch, having the best night ever, and doesn’t even get caught! Soon he’s blasting music, raiding the fridge, and eventually hosts a full-blown dog party!

The intended audience is K-2 with complex sentence structures and some repetition. Overall Stanley’s good dog and the storey develops his character even more, at first as an explorer, then lonely, and finally a party animal!

The plot is strong and quickly builds with anticipation. It’s an exciting read-aloud as the voices have potential to be funny. Children are generally intrieged by animals, dogs especially, and the way Stanley acts as a member of the family, paired with the excitement of getting caught, appeals to children while adults can appreciate the humour.
The scene Stanley invites dogs to his party contains a lot of white space and the illustration goes off the page leaving the impression that there are more dogs involved than can be seen. Conversely, the dog-party is full of action. The text says every kind of dog is present, while the illustration shows them in hilarious situations, conveying a wild party!

Slavin’s curved lines give the dogs a friendly appearance, conveying them as members of the family with human traits. His watercolours and ink add a cartoonish texture.

I highly recommend this book for young independent readers and as a read-aloud as both children and adults will enjoy the humour.

There are no notices for this title yet.

There are no quotes for this title yet.