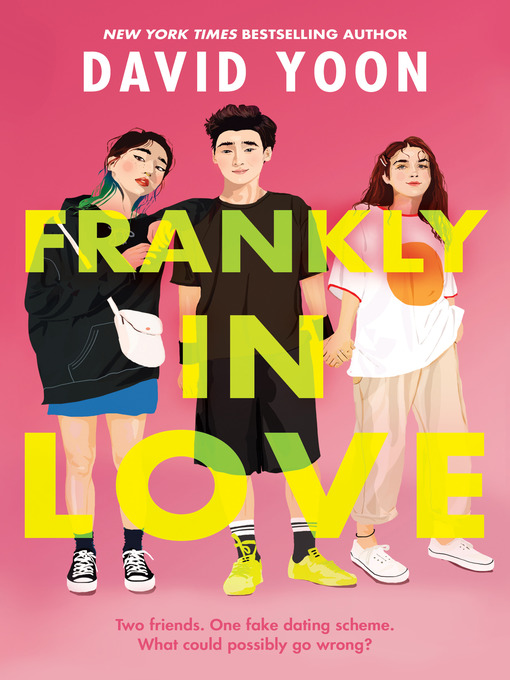 List - Between Cultures: books about youth living in two worlds

A pair of Korean-American teens agree to fake-date to keep their immigrant parents happy while they secretly date their actual, non-Korean crushes.

For the first book of a new author, it's quite impressive. But the author probably still trying to find his voice, because some chapters read a bit like John Green. But it's better to have your own unique voice eventually...

(slight spoilers that are unimportant)
I had high hopes for this book, even to the extent where I bought the physical copy. As an Asian high school student, I was curious and excited to witness how the author told the story of a Korean-American teen and his fake dating scheme, because, you know, you don't see Asian-American main characters in books everyday. However, as I progressed further into the plot, I also sunk deeper into disappointment.

To be frank, Frank is weird. Quirky, but not in an admirable way. I can't speak for all people my age, but I'm pretty sure teenagers don't talk the way Frank does. If you do happen to speak like Frank, please stay away from me. Being stuck inside his head for the entirety of the book was exhausting. There are countless instances of his odd ways of thinking, or his awful, cringeworthy phrases, but I will leave it to you to loathe or enjoy them yourself. Aside from Frank, the other young characters were more tolerable, but most of them still didn't achieve that teenage authenticity I was expecting.

The book was supposed to be about Frank's scandalous crush on a white girl and his fake dating scheme, and it was, but only for about half of the plot. Reflecting on it now, it more seems like a summary of his hectic senior year. But it's fine, because the plot focused more on the bigger issues of racism, prejudice, and discrimination. The exploration of these topics is what I enjoyed most in this book. The author did not hesitate to delve into these issues in multiple layers and dimensions, whether it was between different races, within the same race, or even within the same ethnicity. There were even instances of racism and prejudice that I've witnessed in real life: not the explicit, loud displays in public, but the smaller, almost hidden and seldom talked-about instances that occur in private conversations or even in our own heads. Not to mention, the author did an excellent job in accurately portraying the mindsets of Asian immigrant parents.

Although I greatly enjoyed reading about these topics, I couldn't help but feel bored as I progressed further into the plot. Maybe it was because of my discontent for the characters, or being stuck inside Frank's mind for too long. It felt like the author was trying to insert grand plot points to make it more interesting, such as a character being diagnosed with cancer, the death of a loved one, and even an over-the-top swearing grandmother and his equally foul-mouthed grandson. At the end of the story, even a side character comes out, but he's immediately brushed aside (and rejected), leaving me to think "that's it? okay, I guess." At some point, I'm pretty sure I stopped truly caring about what was going on in the book, and all that remained inside of me was shallow interest, the same kind induced by reading a tabloid magazine.

By the end of the book, I was tired. Maybe I was supposed to feel excited for Frank, who is about to embark on a new path at Stanford (yes, that's right, he got into Stanford University), and for what will happen next in the sequel. I felt nothing of the sort. In short, the book's exploration of the issues related to interracial dating and being Asian in America ultimately bumped up my rating to 3 stars. But like the majority of my classmates at the end of my own senior year in high school, I will never see Frank again, nor will I really want to.

Beautiful, humorous, brilliant, eye-opening and heartbreaking, this is a thoughtful and effective look into the life of a teen dealing with racism and love in today’s world.
High school senior Frank Li, son of first generation Korean immigrants to the US, finds himself stuck between his parents expectations to stay in the “Super Korean” bubble and his personal desire to just be a 17 year old American who happens to be of Korean heritage. Frank wants to date whoever he loves, be friends with whoever he chooses, go into a career field that may not be the most lucrative if that’s his desire and have an affectionate “normal” relationship with his mom, dad and sister.
Yet, his parent’s racism, the cultural Grand Canyon between he and his family that they all struggle to navigate and the strange and complex racial stereotypes he continually stumbles into in daily life are constant reminders to Frank that he’s not white. And if all of that wasn’t complicated enough, there’s a fake dating scheme.
David Yoon, first time author and husband to author Nicola Yoon who wrote the gorgeous YA book “The Sun Is Also A Star,” is clearly a solid storyteller.

This book was so beautiful, it had a little bit of everything in it. I think these are the types of stories that need to be told: here you'll either learn something about a group of people you never knew, or you'll feel some validation seeing yourself represented on the pages.

Honestly, this is the type of book I'm sometimes nervous to pick up to read "for fun". It's the reason I struggled to pick up 'The Hate You Give' just to read during my spare time. Sometimes when you have a deeper connection and can relate to/understand stories like this on a deeper level...it hits different than reading something to understand something new to you. At the same time you appreciate it so much because again...these are the types of stories that need to be told.

I didn't really struggle with this one, I loved it from the very beginning. Frank is so fun to get to know and very endearing. This book touches on culture, race, love, family, duty, and finding yourself...all while making you laugh out loud and smile lots. On the other hand...if you're prone to tears every now and then maybe don't read certain parts out in the open in front of people that will wonder why you're tearing up over lunch. :)

Frank is adorable! I simply loved reading his story. As a book, though, this tried to be too many things. At times I was totally engaged, but at other times I was impatient to get back to the bits I loved.
On page 346 of my edition, Frank is finishing a monologue about oobleck and makes the following statement: "Nothing is just any one single thing. In fact, what starts out as one thing can turn out to be something completely different." That is the book in a nutshell.
And on another note, did anyone totally envision Awkwafina playing Joy in a "Frankly In Love" movie version? I do think a movie could do an excellent job showing us the best parts of Frank's story -- perhaps just focusing on the fake dating story trope.
Not sure if I want to read the second book in the Frankly in Love series. Maybe. . .

Funny, nerdy, sweet, and smart. An absolutely lovely read with believable and familiar characters I want to know in real life. Great for fans of John Green.

This book is absolutely beautiful. I related so much to the protagonist my heart hurt. I think this book is a must-read for everyone, I was sobbing so much at the end I had to stop for a few seconds so my eyes would refocus from the tears. It's absolutely beautiful, stunning, whatever adjective you want to use. Stop reading this and go read that because frankly, I'm in love with Frank Li.

"She was brave—braver than me—but now I wonder if being brave is worth it. The brave go first into battle. But that makes them the first to go down, too."

"The super-Koreans begin to clap, and now everyone’s clapping with them, and I start to get that classic Limbo feeling that I get whenever I’m surrounded by this much Korean-ness: that I am a failure at being Korean, and not doing so great at being American, so the only thing left to do is run away and hide in my own little private Planet Frank."

D: "Kinda wishing I could be white right now. Without the actually being white part."
Q: "White can be anything it wants to be and be white last, not first."
D: "Although, eh, too many war crimes."
"True,"says Q.
D: "I just know I'll never be able to do Korean right. You know what I mean?"
"Me and my family," mumbles Q, "we get (stuff) all the time just for the crime of being ourselves. None of our DC relatives think we're black enough. We got (stuff) when we moved from black Baldwin Hills to white Playa Mesa for my Dad's job. At the last gathering, my uncle made fun of my 'bougie' accent and said he'd have to 'take away my black card.'"

There are no age suitabilities for this title yet.

There are no notices for this title yet.